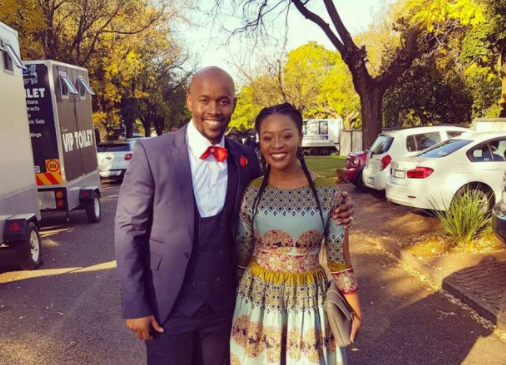 Salamina and Tshepo “Howza” Mosese are one of Mzansi’s most loved couples and their love story is one that has inspired many. The couple will be celebrating 12 years of marriage and have two children are never shy to share about certain details about their union but have managed to keep the ins and outs of their marriage out of the public eye.

Ahead of the birth of their second child, the couple had an interview with Bona magazine, and they shared more on the conversation they had on the type of marriage they both wanted.

“I had been playing what I thought was a traditional role of a wife and I was miserable. Talking about this was very important because we created a marriage that made sense to us.”

In a past interview with I Do magazine, Salamina shared that she and her husband have grown to learn how to treat each other whenever they face finance issues within their marriage.

“Money has been a difficult issue in our marriage in the past. There have been times when we were both out of work, or when one of us didn’t have money. It is the nature of our industry. We had to learn to be gentle with each other and to keep reminding ourselves that we didn’t get married because of money but to make a life together.

“It is important to me as Tshepo’s wife, to make him comfortable during periods when he isn’t working, and to be mature enough to manage my expectations of him,” said Salamina

Salamina shared a clip of their upcoming episode on Celebrated love and invited her fans and followers to tune in and take a walk down memory lane with her and husband.

“Wow!! Can’t believe it has been 12 years already. And with our anniversary coming up in a couple of days, we are inviting you to take a walk down memory lane with us,” wrote Salamina.

Wow!! Can’t believe it has been 12 years already. And with our anniversary coming up in a couple of days, we are inviting you to take a walk down memory lane with us.
Join @HOWZA_SA and I
on @SABC3‘s new show, #celebratedlove– we are on
tomorrow night (Sunday) at 19h30.
😘❤ pic.twitter.com/tEZsjOrBvd

The actors meet when they met when they both were cast on e.tv’s Backstage and sparks flew and 12 years later they are still going strong.