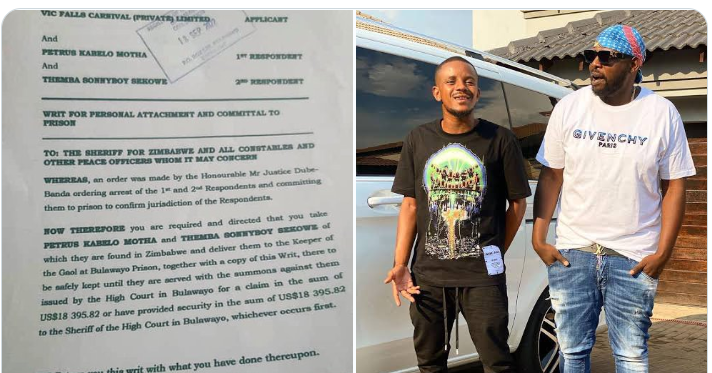 A warrant of arrest has been issued for the arrest of South African musicians Dj Maphorisa and Kabza De Small.

The warrant was issued by the Bulawayo High Court in Zimbabwe. This comes after the duo failed to perform at the Victoria Falls Carnival a few months back.

They failed to honour this invitation and later refused to refund the organisers. These details were shared by entertainment and celebrity blogger Musa Khawula on Twitter.

Here’s the Writ of Summons;

Kabza De Small and DJ Maphorisa failed to show up at the Victoria Falls Carnival in Zimbabwe in May this year. The stage was set for the Scorpion Kings to open the 10th annual carnival, only for them to go for a quad biking vacation in Cape Town.

Organisers of the carnival went public to accuse the Amapiano stars of failing to live to their promises. The three artists are still on the official website of the popular carnival as confirmation of the prior agreement.

At first, the organisers expected to hear from their management about the possibility of rescheduling their performances. After failed attempts to engage the Amapiano stars, the Organizers decided to sue them.