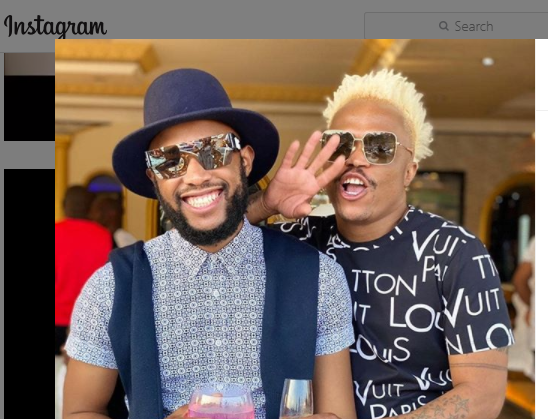 In a radio interview with Anele and The Club on 947 ,  Idols SA judge and self-taught chef Somizi Mhlongo admitted that his marriage to Mohale Motaung has hit the so-called “one-year challenge”.

Mohale secured the bag. He is 25/26, Somizi is going to 50. Guys, how was it ever gonna work? If you go down memory lane of those reality tv shows & all, Mohale just wasn’t there. Som always had to initiate things & always seemed like he was forcing him to do things.

THE ONE-YEAR CHALLENGE OF MARRIAGE

Somizi, who recently jetted off on a lavish bestie vacation with artist Vusi Nova which caused a stir on social media about the state of his marriage to Mohale, stated that his relationship is just like any other that faces its ups and downs and right now, it is just the challenge of the first year of marriage.

“My relationship is exactly like any other relationship. It’s got its ups and downs and at the moment, we are facing that one-year challenge of the marriage,” said Somizi.

SOMIZI AND MOHALE ON LIVING SEPERATELY

The couple, who appears on the cover of the Feb/March edition of True Love magazine, has opened up about occasionally needing space from one another. The pair has not split up, but admit that they make use of the “luxury of retreating” to their “other homes” to take a break.

“We’re fortunate that we have other homes to retreat to when we choose not to be in the same space, so we either go to our homes in the Vaal or Zimbali,” said Somizi to True Love.

Somizi has again taken to Social media to share everything that’s happening in his marriage.  He said,

“It’s not the phone’s problem. It is the person who is using the phone. So, we are not blaming the phone, the phone doesn’t pick itself up …”

“It’s not even about me feeling neglected. I find it also to be too self-serving. If you are not on Instagram, or Twitter, or Facebook, you are taking pictures, you are taking selfies. I feel like, yoh, sometimes I wish to be touched like that phone,” Somizi said in the video.

It was always clear from day 1 ukuthi Mohale akekho lapho… He’s got other intentions that definitely had nothing to do with love and commitment… Its sad shame… Somizi seems like a real genuine person, he doesn’t deserve this mxm