Social media is abuzz today again as Somizi Mhlongo-Motaung and his hubby Mohale Motaung’s alleged marriage scandals are under the spotlight again.

This comes after a Twitter user whose Twitter handle is @BadubeS, went on a rant accusing Television presenter Andile Ncube, of allegedly being gay and having a sexual relationship with Sunday World journalist Theo Nyhaba.

The Twitter user accused Andile of feeding Nyhaba inside information on Somizi’s alleged rocky marriage. Andile was exposing after he weighed in his opinion on a medical doctor who has been trending on Twitter, after tweeting that he allegedly got a homophobic man blacklisted from registering at any university after writing a homophobic status on Facebook.

The topic was sparked by MacG’s latest podcast on Podcast And Chill with Mac G, where he came under fire for offending the LGBTQI community.

The young doctor said the man allegedly committed suicide thereafter causing outrage on Twitter with many accusing him of being wicked. Andile commented and said the doctor has mental issues and he needs help. 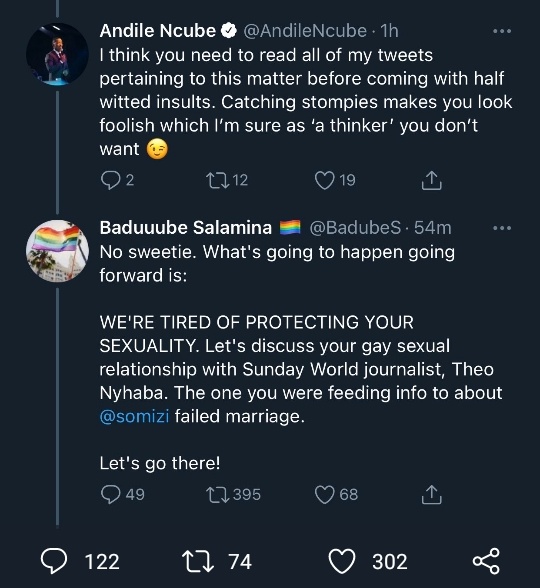 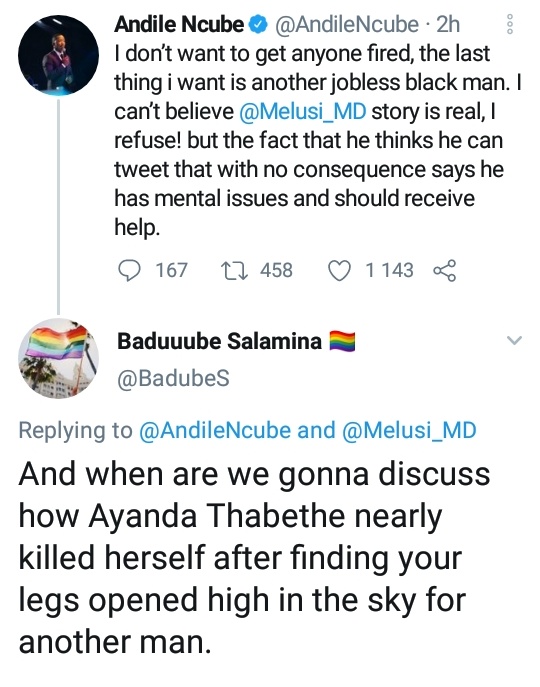 His tweet got him exposed when @BadubeS, wrote, “No sweetie. What is going to happen forward is: WE’RE TIRED OF PROTECTING YOUR SEXUALITY. Let’s discuss your gay sexual relationship with Sunday Wold journalist. Theo Nyhaba. The one you were feeding info to about @Somizi failed marriage” reads a tweet.

Andile and Ayanda filed for divorce a few years ago and Ayanda confirmed on Fresh Breakfast that it was an amicable divorce “I think that it is growth. It’s understanding that it’s okay when things don’t work out.