Fans of award-winning presenter Thembisa Mdoda-Nxumalo had even more reason to celebrate as their fave gave them a rare look-see into her private life with a snap of her husband’s face.

The presenter, who is known to keep her personal life mostly to herself, finally decided to help her fans put a face to “Mr Nxumalo”, after not having done so since they started dating.

Thembisa Nxumalo revealed that she was officially off the market, and after her sour breakup with award winning actor Atandwa Kani, Thembisa is adamant on keeping her marriage life off limits to the pubic, but the she may have had a moment of weakness after she posted a rare pic of her husband.

Thembisa posted an appreciation post dedicated to her husband claiming that she knows that she found her soul mate in her husband and she is head over heels in love with her hubby.

“A soul mate. My crush. I married an amazing gent here…thank you baby” she wrote

The tweet has since been deleted off of Thembisa’s twitter meaning that we will probably never get to see who her mystery husband is, so this was a rare sighting indeed. 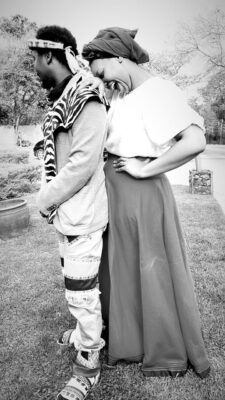 That’s not all the Photos. Click Next and go to the Next page for More Hot Photos of Thembisa Mdoda-Nxumalo’s New man , and Also Check Her New Bikini Photos out;

Go to the Next page for them;