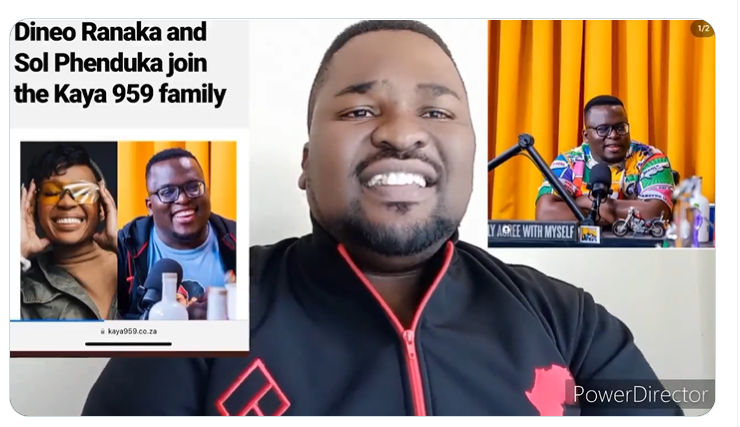 When Kaya 959 announced major changes to their show, they created hysteria on social media and fans were looking forward to it. Fast forward to a month or so after Sol Phenduka and Dineo Ranaka joined the Breakfast Show, fans are already calling out the producers for even thinking this duo would work, because it simply isn’t.

Many have pointed out how Dineo Ranaka talks above Sol in an attempt to overshadow him and dim his light. This was pointed out when they had an interview with Somizi Mhlongo where Dineo seemed to ignore Sol and would cut him short before he could finish off his sentence.

Others were not impressed by how Dineo would send Sol on some errands while the show is live.

He said: “My boy was being treated like a toddler, disrespect all the way by Dineo Ranaka. Sol Phenduka cannot talk, he cannot ask a question, he has to raise his hand”. “You ought to treat that man with respect because he is your co-worker, not your sidekick. He’s not your buddy, he’s not your pal, he is there to work. It’s 50/50.

“Who the hell are you Dineo Ranka? What have you done that is so amazing that we have to listen to you talk for three hours every day?”

He continued: “Dineo Ranaka let me give you a reality check. We all know that you have three baby daddies, and we’re not going to hold it against you. But Sol Phenduka is not baby or baby daddy number four.

“It’s not the Dineo Ranaka breakfast show. Both of you were called by Kaya FM and I can tell that they didn’t do their homework.

“Because Dineo Ranaka is the same person that tried to get Sol Phenduka fired on Podcast and Chill. Dineo put in a phone call to MacG and said he needs to get rid of Sol Phenduka. That means she feels threatened.

Slik Talk also claimed that Dineo and Sol’s personalities do not gel well together – a claim many tweeps have stated.

He added: “She doesn’t like his type of humour. She’s a bully, aggressive, and in your face

“Sol is more like a friend who enjoys camaraderie whereas Dineo Ranaka likes to debate, argue, and have the last word. That is why she is mistreating this guy, making his life a living hell”.