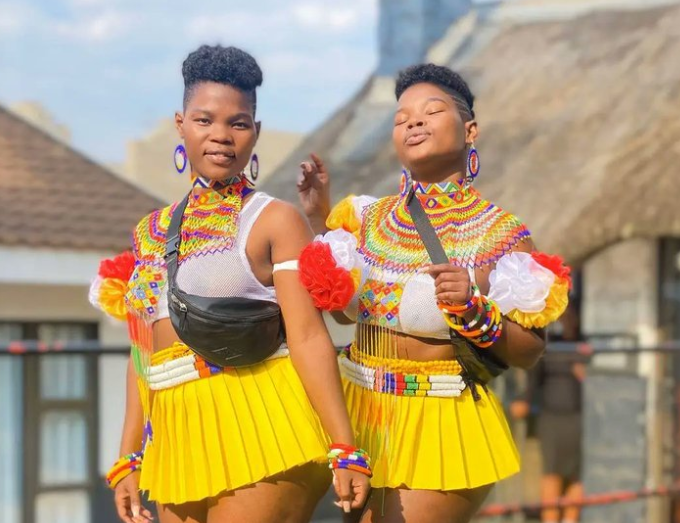 Virginia and Viggy, also known as Qwabe twins, have received a lot of praise after sharing that they attended the Reed Dance this past Saturday at Enyokeni Royal Palace in Nongoma, KwaZulu-Natal. They took great pride in the fact that they are still virgins at the age of 25.

Numerous virgins are drawn to the Reed Dance, which offers them the chance to develop self-confidence and encourage sexual abstinence. This year’s maidens at the ceremony, the Qwabe Twins, were praised for maintaining their virginity despite working in the entertainment business. The Reed Dance attracts scores of virgins, giving them the opportunity to learn how to carry themselves and promote sexual abstinence.

In an interview with Daily Sun, the singers revealed that they’ve been doing virginity tests since age 10; it was said to be an inspiration from their older sister.

“We were only 10 years old when we started attending virginity testing. Our older sister used to do it and we were inspired to join her. It was a voluntary decision and we are happy we took it. Initially, we were doing it for fun. But as we grew older, we realised its importance,” said Viggy.

The two further said that they’ve not had a boyfriend as they are focused on music. Taking to their Instagram account, they shared a picture of them dressed in stunning traditional dresses.

According to Viggy, they initially attended the Reed Dance for fun but later understood its significance. They had admitted that they started going to virginity tests when they were just ten years old. They were motivated to follow their older sister’s example because she used to do it. They were happy to accept it because it was their free will choice. At first, they were doing it for fun, but as they got older, they understood how important it was. At the age of 16, they then began going to the Reed Dance.

The twins who exited the singing competition and went on to make a hit song ‘Hamba’ with DJ Tira have finally rubbished claims that they have sexual chemistry and that they’re dating each other.

In the video of their song ‘Hamba’ the twins are seen standing next to each other, facing the camera while the other kisses the other’s cheek. They then face each other; holding hands, share a deep passionate kiss, and smile.

The twins stated:” ” The love that we have for each other is very big but that does not mean that we are dating each other as sisters. We have always been like this. We spend a lot of time together as sisters. We are not in a relationship with each other or anyone else and we are not planning to start our own families anytime soon”. They also stated that they prefer polygamous marriage when they get married.

Here is a Video of the Kissing;