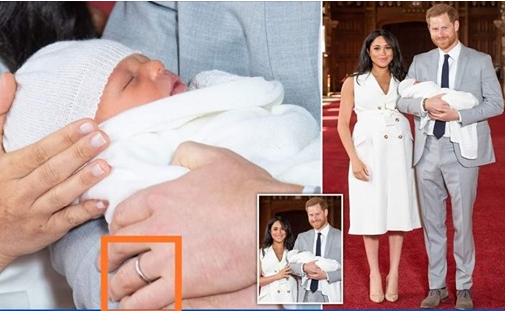 On Monday, the Duke and Duchess of Sussex, Meghan Markle and Prince Harry, announced the arrival of their baby.

Two days after, they have shared the first pictures of the #royalbaby to the world.

The Duke and Duchess of Sussex stood together at St George’s Hall at Windsor Castle in Berkshire, with Harry holding the little on in his arms.

“It’s magic, it’s pretty amazing, “I have the two best guys in the world so I’m really happy. He has the sweetest temperament, he’s really calm. He’s just been the dream so it’s been a special couple of days,” Meghan said at the press photocall.

The Duke and Duchess of Sussex officially tied the knot on 19 May, 2018 in St George’s Chapel at Windsor Castle in the United Kingdom.

This is their first child together.

See Pictures of #royalbaby below: