While she thought she was making an appearance to perform her hit song, John Cena, little did Sho Madjozi know that she would FINALLY meet the man she’s been singing about all these months.

Sho was a guest on The Kelly Clarkson Show on Thursday to speak about the success of the song that has resulted in her dominating international airwaves.

When asked by Kelly whether she’d ever had the chance to meet John, Sho said, “Oh no, of course not, not yet. I hope to meet him one day.”

Although the American wrestler has posted about Sho and even danced to the song, the singer told Kelly that he’d never tagged or said anything to her directly.

Lol, Kelly then replied that the reason behind that could be because Sho couldn’t “see John Cena”.

After a laugh or two, Sho proceeded to tell Kelly she loved John nonetheless and if she were to see John she would “die”. 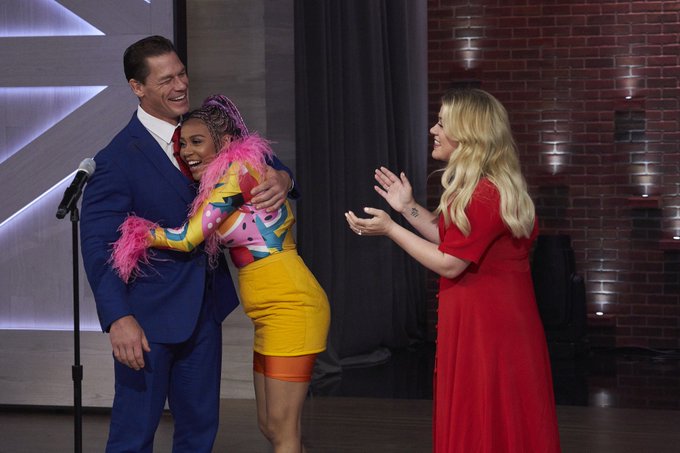 Kelly then tricked Sho by saying that she wasn’t meeting John on the show as they had a limited budget. “But he’s watching and he will love your performance.”

As expected, a very excited Sho jumped on stage and started performing her hit song and a few seconds into the song,  John Cena appeared behind her.

Yoh! Did moghel not lose it?! She screamed for joy and then jumped on John and embraced him with a big hug.

Thatha Sho, from SA to the world girl!

Photos: Riky Rick Celebrates His Wife On Their 7th Wedding Anniversary ; Here is His Sweet Message

Photos: The Queen actress, Zenande Mfenyana Shows off Her Baby Bump In Style; Confirms The Gender of Her Baby

Photos: AKA and DJ Zinhle kiss each other in public to...

Photos: Rosette Ncwana Reveals Her New Man With A Sweet...