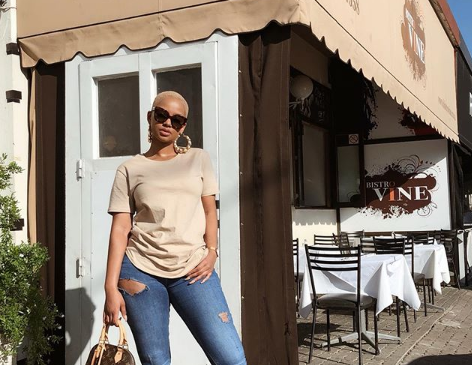 Police were reportedly called to escort the beauty vlogger off a flight in an incident that has divided social media.
Beauty vlogger Mihlali Ndamase caused a storm on social media over the weekend after alleging that she and her friends had been called “animals” by a FlySafair flight attendant.

In a post on Instagram, Ndamase posts a picture of the flight attendant and alleged she and her friends were told they were too loud and called “animals”. She said police were called to escort her group from the flight but that when they arrived they saw “nothing wrong” with their behaviour.

“I can’t believe we have to deal with such treatment in 2019 for being black,” Ndamase said in the post.

The issue has divided social media, with some supporting Ndamase and believing her story and others expressing scepticism. Some have called for both parties involved in the altercation to be held accountable.

According to various social media users, however, Ndamase had “boasted” about having smuggled gin onto the flight, in a now-deleted post. Some believe this is evidence that her version of events may not be a true reflection of what happened.

A WhatsApp message in which a person alleged to be the flight attendant accused of calling Ndamase and her friends animals is questioned by an unnamed individual has also been shared on social media.

In the message, the flight attendant claims that Ndamase called her a “bitch” and threw a glass at her, that she and her friends were drunk and that she did not, in fact, call the group “animals”.

The authenticity of the message has not been confirmed.

Bonang responds to suggestions she & DJ Zinhle should make up And Be Friends; Here Is What She Said

Photos: Here Are 10 Top Mzansi Celebs And Their Expensive Cars They Ride In; Check Them Out

Photos: Trevor Noah nominated for Grammy ; Here is How Trevor...

The Fergusons, Vatiswa Ndara and the money – what you need...