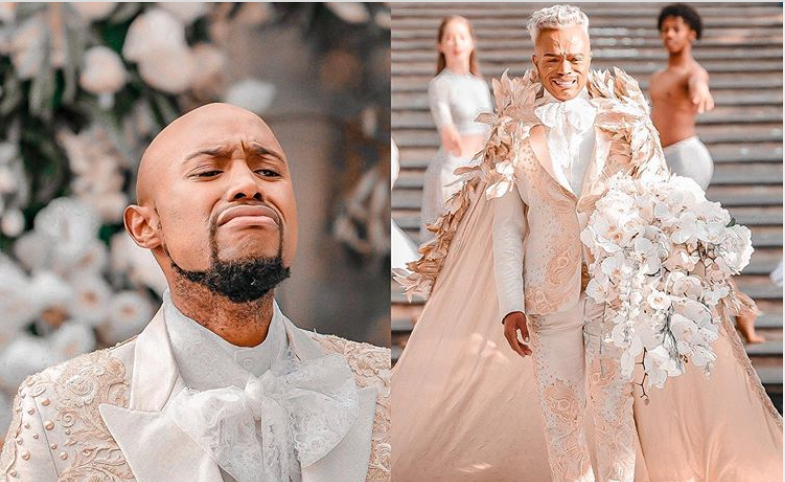 The highly anticipated interview, in which Somizi’s ex-husband Mohale Motaung shares his side of the story about their failed union has finally aired on Showmax. Somizi and Mohale were arguably Mzansi’s top celebrity gay couples and they left many green with envy with their relationship goals. Their wedding special Somizi & Mohale: The Union, was labeled The Union of the Year

Sitting down for almost an hour with news anchor Aldrin Sampear, Mohale shared shocking details about their relationships and made allegations about things that led to their divorce. Some of these details include an alleged assault, infidelity and misuse of power, among others.

Mohale  spilled the beans on the very romantic trip in Europe where Somizi proposed to him. He revealed that Somizi and Orlando, met for the time after communicating online. He said the two were meant to be a couple but he came into the picture and Somizi had to befriend Orlando.

Mohale said he told Somizi he never had to think about such “He said I think we should have a three some with Orlando and I was shocked,” Mohale continued. Mohale cheated at the beginning of the relationship

“I cheated three months into the relationship and it’s not something I’m proud of because it hurt me to see him hurt that way. I had no reason to cheat and was just being selfish and I didn’t think about him or how he would feel,” he says before detailing how Somizi found out about the infidelity.

Disputing what has been reported about their divorce settlement and what Somizi has said on his reality show about it, Mohale says at the beginning of the divorce he only wanted his clothes, to be paid for the damages made to his car and money from their wedding special.

“I had stated in the documents sent by my lawyers that I want my clothes, the car he had bashed and the money for the wedding,” Mohale claims before adding that Somizi was actually the one who suggested that they have a joint estate.

When Aldrin asked if he had received anything from Somizi like the reality show had claimed he did, Mohale says to date nothing was sent to him.

“Those boxes they showed on the show were never received by me. The car damage was caused by Somizi running me over with his G-Wagon after an argument and he hasn’t fixed it. The money for the wedding special is still with Legend Manqele and was supposed to be shared between the two of us. The money cannot be released because Somizi wants it to be paid to SARS but my lawyers are dealing with that situation,” Mohale concludes.

mohale motaung speaks on being abused by sarafina.

Somizi assaulted him for the first time in their home

Mohale details the first alleged physical assault he experienced from Somizi and says it happened upon Mohale’s return to their home from a Durban trip.

“For me, it was about seeing the person like I’d never seen him before. He was angry at the fact that I went to work in Durban,” he explains.

“I remember when I walked in he had a bottle of champagne in his hand and the first thing he asked was where am I coming from. I was surprised because he knew where I was coming from but he claimed I was lying. As I was changing my clothes, he started spilling champagne on me and started beating me,” Mohale alleges.

“He started hitting me on my ribs and I couldn’t walk and would crawl down the stairs. At that point, I believed that my ribs were broken because I couldn’t move that part of my body,” he tells Aldrin before saying that he then went to a doctor friend of his, who examined him and found that his ribs were not broken but stretched.

Mohale says this was only one of the other times he was allegedly assaulted by the Idols SA judge.