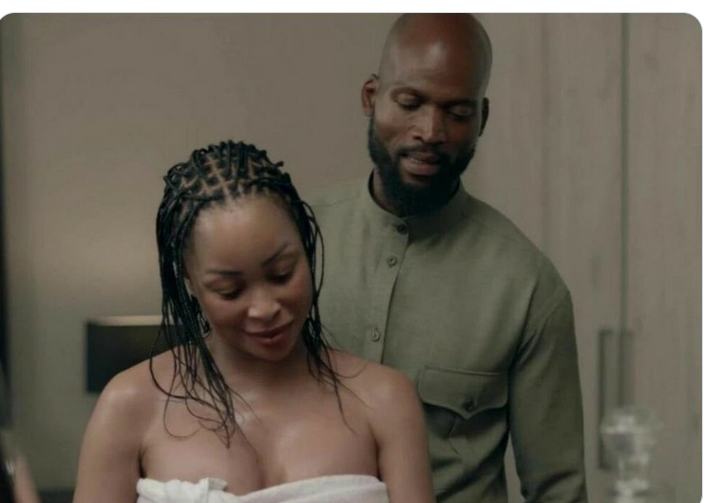 Mondli Makhoba, who plays Nkosana Zulu in The Wife, talks about how he got ready for the bedroom scene he did with Khanyi Mbau with the help of his real wife.

Despite the fact that it was all staged, viewers couldn’t help but wonder how their real-life partners felt about the sexually explicit behavior in the bedroom.

Mondli Makhoba talked about how his wife felt about the bedroom scene he shared with Khanyi Mbau and other actresses on MacG’s Podcast and Chill. One of the actors was the actress Khanyi Mbau.

He reported that his wife had actually given him the go-ahead and encouraged him to not be afraid to express his feelings, despite the widespread perception that she might not have approved of the incident.

She sent me a message encouraging me to go beyond my limits. Let it all out, go as far as possible, and I think it helped me a great deal since you know while you’re following through with something and you’re thinking, “eish, I will be in a difficult situation when I return home… ” and so on. I didn’t have that, and my family gave me the all-clear, so I could go on,” he said.

The Wife is trending high on social media as its viewers discuss a spicy love scene between Zandile, real name Khanyi Mbau, and Nkosana, portrayed by Mondli Makhoba.

Some of the viewers of the Showmax telenovela were happy to see their fave couple Mqhele and his wife Hlomu locking lips on the three episodes that dropped this Thursday .

Peeps took to Twitter to share that Zandile and Nkosana’s juicy scene looked so real and is better than some of the scenes on Fifty Shades of Grey.

Taking to Twitter, some viewers thanked the show’s producers for listening to their complaints about a boring storyline last week. Other viewers were also happy to see their fave couple, Hlomu and Mqhele, sharing a kiss. ANother people too feel they’ve taken the storyline too far.

This is the Khanyi Mbau sex scene pic.twitter.com/s4GT94z4GN

This week’s episodes consisted of something viewers have not seen with local TV productions – and that is fire s*x scenes. Season 2 of The Wife focuses on Nkosana and Zandile, played by Mondli Makhoba and Khanyi Mbau, and their love story.

When it first started out, we saw the chemistry between Zandile and Nkosana and the way he talks to her which is very warm and loving. Just how Khanyi Mbau envisioned.

The love is still there but viewers are still unimpressed with the storyline, seeing how Khanyi’s former prison buddies are looking to shake things up.

This has to be the most explicit sex scene ever from a South African production.

Ain’t never seen anything like this from Mzansi actors 😂🤣#TheWifeShowmax pic.twitter.com/QKmOta7HOK

One thing which stood out though is the bedroom scene between Nkosana and Zandile which raised the bar, because no other local production had attempted to give viewers such R-Rated content.

Do you like this, or it was too much exposure?