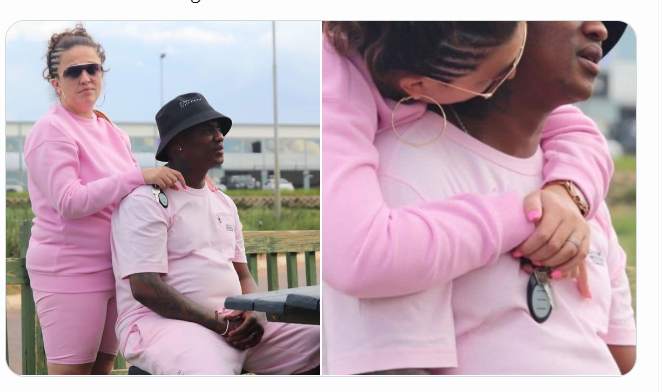 Jub Jub, who is popularly known for hosting a reality show on Moja Love TV, recently caused a frenzy on social media after pictures of him and his girlfriend were posted on social media, which got people talking.

The two were wearing matching outfits in the color pink. There were mixed reactions to the comments. Some were surprised that Jub Jub was in an interracial relationship.

Others speculated that he was most likely after the lady’s money because of her race. There were individuals who highlighted that Jub Jub looked happy and in love with his girlfriend. In a related news, It seems that controversial TV presenter Molemo “Jub Jub” Maarohanye has been caught in his own behind-the-scenes episode of Uyajola 9/9, as his fiancée, Tumi Mthembu (35), accuses him of being disloyal.

Jub Jub is reportedly in another long-term relationship with a woman known as Zenith “Zee” Mia, and is living with her at her home in Johannesburg’s upmarket Eye of Africa golf and residential estate.

Mthembu produced proofs of payment ranging from R2000 to R50,000, demonstrating she financed the star’s extravagant lifestyle for years.

I paid him visits in jail and the stables. I’d visit his relatives. He’s my friend. His birthday behavior was the last straw. I realized he never loved me but was using me.

Mthembu, who has media ties, said she rebuilt Maarohanye’s public image in 2017 after he completed four years of a 10-year prison sentence for culpable homicide.

His public wife isn’t his wife. She’s another of his girlfriends. Not her. She says she’s his major partner because that’s what he wants us to think.

“He places a ring on your finger and says you’re engaged.” He urged me not to share our photos online because he didn’t want his future bride to be publicized. So I thought he was with me, but he was just dating both of us.