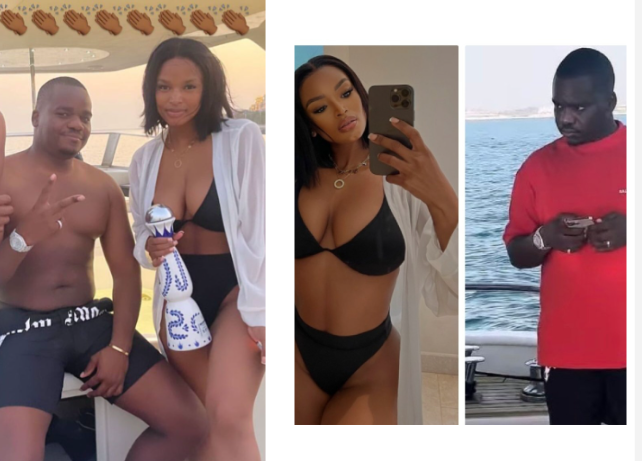 Controversial multi-millionaire and Ayanda Thabethe’s baby daddy Peter Matsimbe is topping trends after his business empire and his net worth were revealed.

Not so long ago, Ayanda refuted claims that she was seeing the controversial business mogul who has been implicated in several drug scandals. Of interest is the fact that he is married. Despite some overwhelming evidence pinning the two in a relationship, Ayanda has continuously distanced herself from the drama.

Peter Matsimbe’s baby daddy is said to be a married man and a father to two sons his wife had for him. The name of his wife is given as Shannen Thring, but there is no available information about her personal life and career.

Thabethe initially managed to keep the identity of her baby a secret. Throughout [her pregnancy and up to the time she had her baby shower, she purposefully kept the name of her baby daddy to herself while being loud about her bundle of joy and how he had already made her life complete.

He does however, still have his wedding ring on in the pictures and videos that Ayanda Thabethe has shared. No doubt, despite being rich and all, Peter keeps his private life under wraps. His alleged IT bubbly media personality has let us sneak into his private life of late. Rumour mill has it that he is one of the biggest drug lords in Swaziland and has since extended his trade to South Africa.

The star made headlines a few weeks back after rumours that she was dating a married man named Peter Matsimbe, but he issued a statement rubbishing the allegations. Here’s a photo of Ayanda Thabethe’s baby daddy with his ring still on;

Well, it’s six months gone already and she is grateful to God for giving her such an amazing Son.

Ayanda wrote: “6 months ago, God remembered me and looked down on me with favor, and my precious son was born. I’ve been thanking Him ever since… The sweetest love I’ve ever known. 🙏🏾❤️” Although she has kept her baby daddy’s identity top secret, Ayanda Thabethe gushed about him in her Instagram stories. The doting mom said her bae bought six toy cars for their son.

Media personality Ayanda Thabethe shared her motherhood journey on social media, announcing that she has given birth to a bouncing baby boy.

The beautiful Celebrity Game Night star shared an emotional video where she chronicled her pregnancy journey right up to the birth of her bundle of joy, writing in the caption that she was happy about her newly found love.

Ayanda almost shares a birthday with her child, who was born on March 16, a day shy of her birthday. Peter Matsimbe and his baby mama were secretly dating before the public knew about their affair. Unfortunately, their relationship timeline is under the radar as the exact month and year they started dating are unknown to the public.