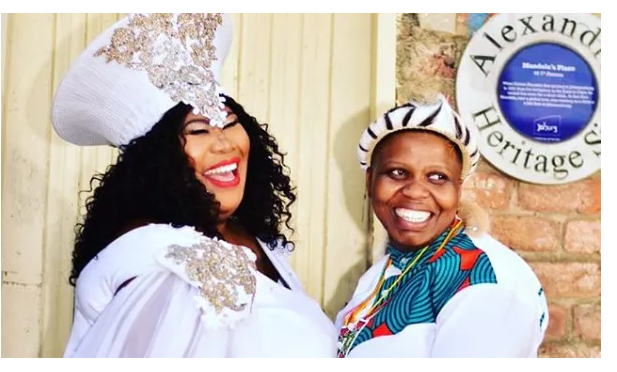 Nomusa Buthelezi-Shezi has celebrated her first anniversary with physiotherapist wife Zandile Shezi. In a video clip, they described their romance, with Nomusa telling fans it was love at first sight but she was shy.

They both noticed each other but Nomusa was on duty with Our Perfect Wedding. They started a long-distance relationship as Zandile was in Ladysmith and Nomusa in Joburg but visited each other from time to time.

Nomusa said: “We got married last year on 28 September. We met in Mpumalanga at Riah and Simphiwe’s wedding and it was my first gay wedding. When I saw Zandile, I told my makeup artist there’s my type. Then Zandile also noticed me. Then her best friend ran towards our bus and started greeting and kissing me on the cheek.

“After the ceremony, Zandile asked us to join them for the reception. I went back to meet her and her friends. Sometimes I become sad because I’ve to leave my kids but I taught them to be strong. I was also going through things and I feel God knew what I wanted and I didn’t pay attention. Things happened like a miracle and my life changed. There was something different about her.

“But I was also very scared because of past relationships. Some of my friends bad-mouthed me. I was in a love relationship and people were judging me because of the age gap. I was called a blesser.”

To get over this, she used her work as an escape.

“But after meeting Zandile, she also did not call me because she was scared of rejection. I then called one of her friends and asked her to pass my greetings to her. From there we started communicating.”

When Zandile promised to marry her, she didn’t believe it.

“I thought she was joking. But when she actually proposed I was at work and she told me she would send her family at home. I was shocked but eventually told my parents. They were also shocked. In my head, I could see the Daily Sun headline. So I kept the news secret from my friends.”