Although actress Cindy Mahlangu has not confirmed the birth of her first child on her Instagram feed, she posted an Instagram story wishing her boyfriend Bongani Zungu a happy Father’s Day.

He reshared the story and also wished his own father a happy Father’s Day by posting images of himself and his dad side-by-side along with the praying hands emoji and the dove emoji (often used to signify that someone is no longer alive).

Cindy Mahlangu finally shares moments between Bongani and their baby in celebration of Father’s day. She shared a picture on her Instagram stories while wishing her life partner a happy father’s day on this special and remarkable day.

A few months ago the couple was rumored to have welcomed their first child together but never confirmed it.

According to reports, Cindy allegedly moved overseas at some point to join her footballer boyfriend and it’s alleged that that’s where she also gave birth to their first child together. The beauty is however back in SA shooting ‘Kings of Joburg’ season two. 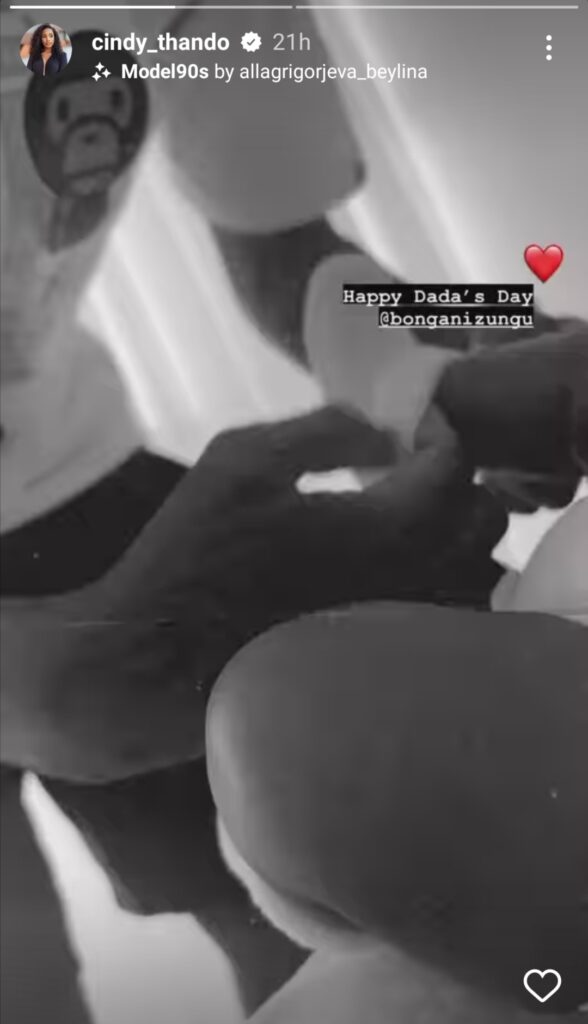 Whilst most of it is not confirmed, the actress finally confirmed not only motherhood but the father of her baby in a sweet and short Father’s Day shoutout to her partner on Instagram stories.

Taking to the platform, Cindy shared a cute video of Bongani being a hands on dad, dressing their baby. “Happy Dada’s Day @bonganizungu,” the new mom captioned the video.

The couple is yet to confirm the gender of their baby. Congratulations to the happy parents.

Taking to social media with the cutest and slightly questionable post ever, Bongani and Cindy shared a clip that openly let peeps know they are a thing. Fans are buzzing.

An Instagram Live the two are seen debating on whether Bongani watches telenovela, The Queen, which the actress stars in. At the end of the video, he is heard asking her if he is making her blush with her laughing in response.

In a recent Instagram story, the football star shared a short clip of himself and Cindy looking all intimate. He also tagged Cindy in the post, which she reshaped with a cute reaction on her Instagram stories.